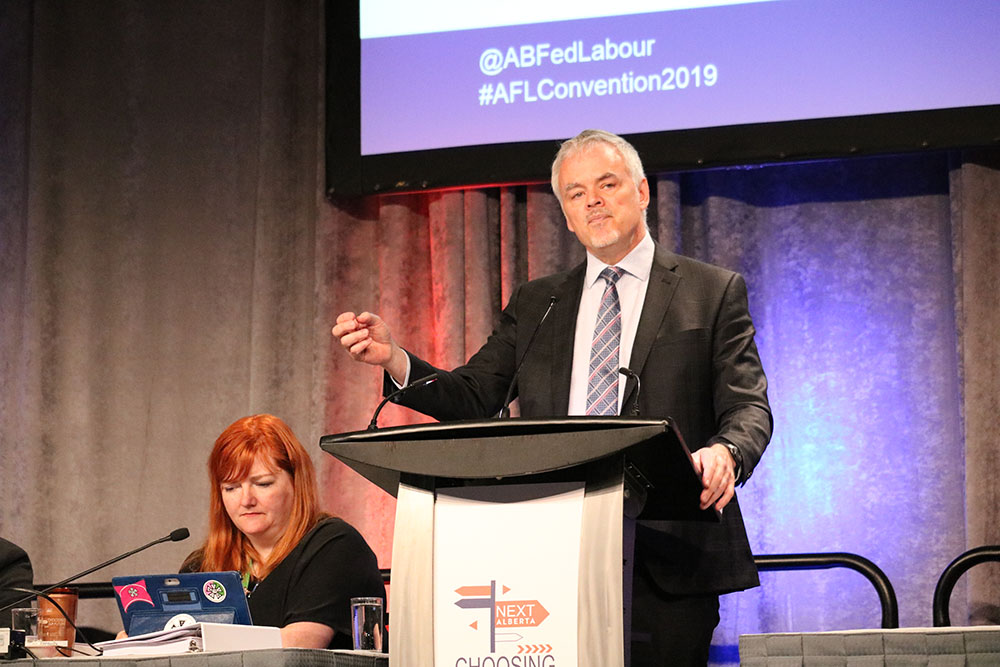 He began by describing how the economic history of Alberta has created an economy dependent on the boom and bust cycle of the oil industry, which has dominated the economic and political structure of our society. However, Stanford provided a new way to think about economics—based on the contributions of workers, supported by strong public services, and funded by attaining maximum value for our resources.

“Every time the oil industry boomed and busted, the captains of industry and conservative politicians or apologists will try to find a scapegoat. In 1981 it was Trudeau Sr. and the National Energy Program. In 1986 it was undisciplined OPEC members. 1999 was blamed on an El Nino. 2014 was blamed on the Alberta NDP. 2018 has any number of scapegoats; the carbon tax environmentalists, the B.C. NDP; equalization; immigrants. They look to blame everyone but themselves.”

“We have a history of relying on natural resource staples development. It’s not a bad thing; it creates investment, jobs, regional development, transportation & infrastructure, nation-building. But it has downsides. Wild price swings, foreign demand swings, cost of export infrastructure, indigenous conflict, environmental effects, lack of diversification, dependence on foreign capital, negative long-run terms of trade. Any economy based on exporting staples and importing back value-added products is vulnerable to shifts in foreign demand & price.”

“Dispense with idea that Alberta is just about oil. That is a disservice to Albertans. We are so much more than oil. And we can do a much better job at translating work & production into lasting social & environmental benefits. Understanding the risks and limits of staples dependence, can inform our efforts to develop a more balanced & beneficial economy.”

“The real Alberta advantage are the resources around us—our people, our skills and capacities; we have the highest-skilled workforce in all of Canada, we are the most youthful province in Canada, the infrastructure of our communities and our province, our capacity to make decisions and act together—social capital, the ability to cooperate and trust one another."

“Here’s a plan for Alberta. Continue to use non-renewable resources in the short-term and have our eyes open to the future of that industry. We need to capture the maximum value from non-renewable resources. While we need to invest in the rest of the economy where 95% of Albertans work. Instead of cutting and denigrating public services, we need to celebrate its contribution to a strong economy and society. We need to invest heavily in infrastructure. And we need a proactive plan to deliberately share the wealth.”

“The economy is the sum total of the work we do. We need to get people working on things that matter. We need to carefully manage our resources and industries, and we need to share the wealth.”

President Gil McGowan summed up the presentation by stating that Jim had given the Alberta Labour movement a powerful new narrative on how progressives can approach economics. We were also joined by Stanford’s parents: Yvonne Stanford and Jim Stanford Sr.