A jam-packed day three of convention calls on delegates to learn from our past as we look to the future, and to join the fight against intolerance 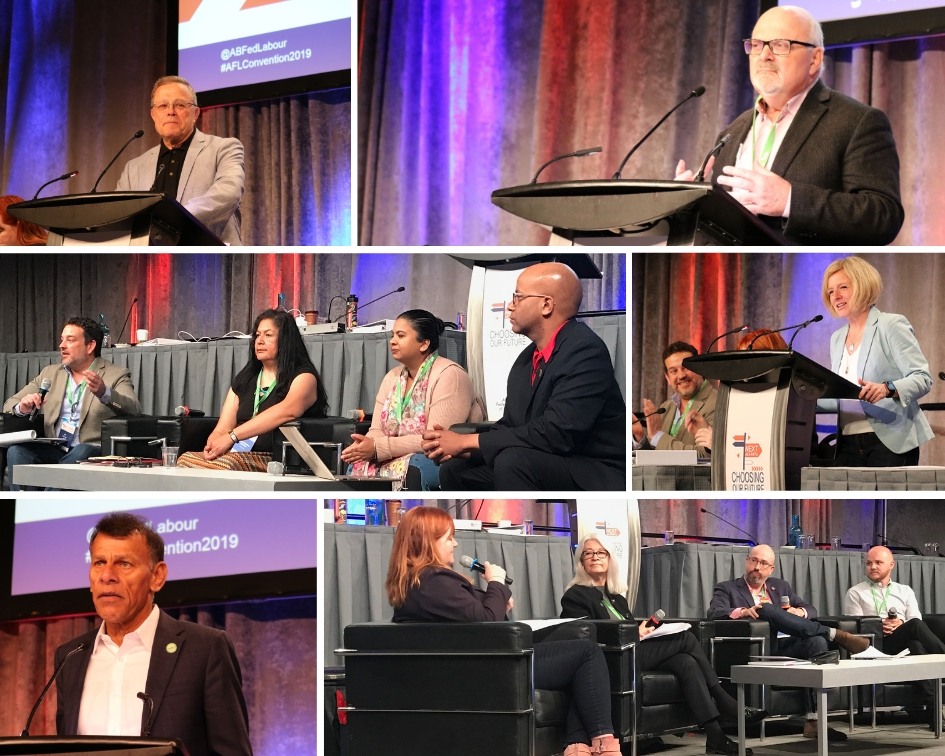 The day began with Winston Gereluk, Alvin Finkel and Don Bouzek from the Alberta Labour History Institute providing delegates with an informative session on 1919 – The Year of Revolt, including the Winnipeg General Strike.

A powerful speech from John Max Smith followed. He shared the political and spiritual journey he took with his late father, Harry Leslie Smith, for the past 10 years to promote the importance of the Welfare State to maintain our democracy. John called on delegates to learn from the past, and to not let his father’s past be our future.

This was followed by an important panel on the Rise of Intolerance/Who Speaks for Workers.  The panel included Malcolm Azania, Saima Jamal and Jean Old Shoes, who shared about their experiences combating racism, fascism, Islamophobia and other forms of intolerance in Alberta.

Lunch time included an educational session that allowed delegates to dive deeper into the need for all of us to take action in combating the Rise of Intolerance.

Alberta NDP Leader Rachel Notley, who now leads the strongest opposition this province has ever seen, joined delegates after lunch, reminding us all that we are at our best when we have each other’s backs. She thanked the labour movement for the hard work and support over the last four years and called on all of us to help in the ongoing fight to move Alberta forward, not back.

The afternoon included a passionate greeting from CLC President Hassan Yussuff, a report from the Political Action Committee, and of course, more vibrant debate on important constitutional and policy resolutions!

Convention ended the day hearing from an insightful #ABPoli panel made up of Duncan Kinney from Progress Alberta, Mike Morrison from Mike’s Bloggity Blog, and Susan Wright of Susan on the Soapbox.

Please take the time to fill out the survey for day three of convention. We will draw a name each day for a free piece of AFL Convention swag!

Passion from the panel on the Rise of Intolerance.

Delegates are reminded that all are welcome to attend the breakfast educational on political action at 7:30 Sunday morning in Macleod A1/2.

Please share your convention experience using the hashtag #AFLConvention2019 and remember you can always head over to Facebook and Twitter to see updates and photos from day one of convention.

And thank you to all of our day three convention sponsors!