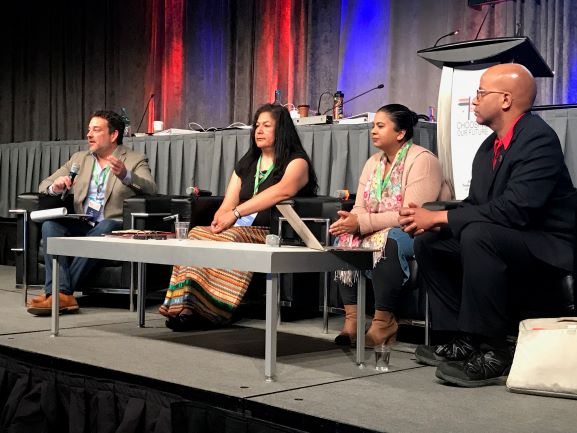 Experiences with and actions against intolerance.

Convention was pleased to welcome a panel of activists to share about their experiences combating racism, fascism, Islamophobia and other forms of intolerance in Alberta.

Jean Old Shoes, Co- Founder of the Apiiistamiiks - White Buffalo Trail Blazers, Saima a social activist and community organizer, and Malcolm Azania a critically acclaimed author, teacher and anti-fascist activist. They shared their experiences with intolerance in Alberta and what they are doing to combat that.

When asked if what we’re seeing is new Jean said “No what we are seeing we’ve been dealing with since the first contact with Europeans.” Though she alluded to some increased violent harassment aimed at the most vulnerable people.

Saima built on that to say “What is really different now it isn’t just politicians or media personalities. It is militant rise of intolerance.”
When asked about intolerance in the current political climate, Malcolm said “Asking the question 'does the UCP have a problem with racism' is like asking if banks have a problem with money. It’s their business model. It’s not a bug, it’s a feature.”